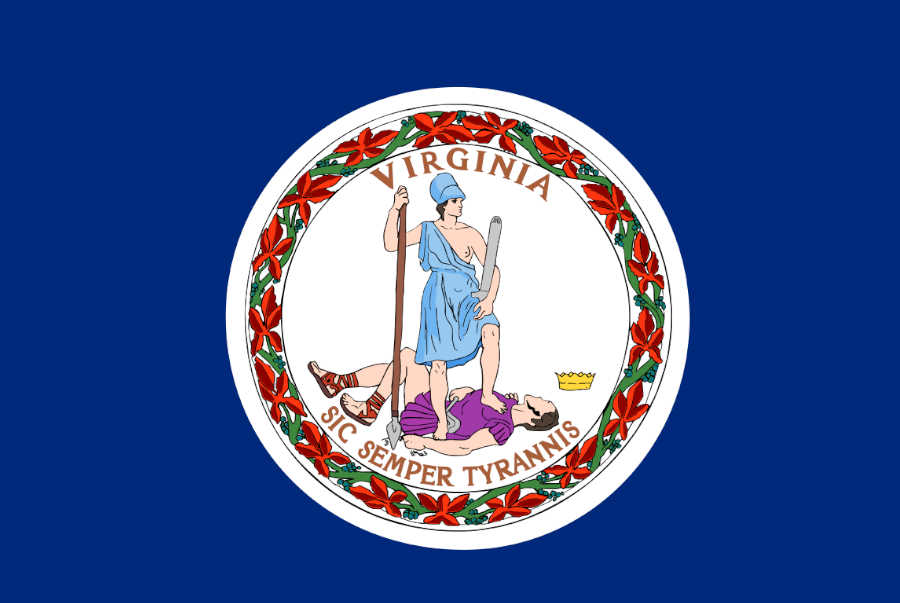 Virginia is one signature away from giving an initial go-ahead to its online gambling industry. Even if the governor approves the bill, it will take the state’s regulator and lawmakers over a year to set up the first casinos.

SB 1126 – One Signature Away from Becoming a Law

The year started off well for Virginia. In January, 2019, the Virginia Senate General Laws and Technology Committee gave its approval to a bill that would allow online casinos to open doors in the state.

The few months since, SB 1126 has made quite the headway and today it’s perched at the desk of Gov. Ralph Northam who should decide its faith. Mr. Northam is rather non-descript when it comes to online gambling – he hasn’t been against it publicly nor has he said that he endorses it.

With his signature now needed by March 26, everyone’s on pin and needles whether the Governor would grant his approval.

Virginia is one of the states where the proposed legal draft is quite specific as to where online casinos can operate in the first place. With the Virginia Lottery Board taking over regulation, there are quite a few specifics that candidates would have to meet, including:

Virginia will also initiate a series of city-based referendums where the people will have to decide whether they want to give their go-ahead for casinos.

Virginia is one of the most complicated states to navigate when it comes to passing online gambling, not only in terms of mustering up the legal support, but also making sure that eligible cities exist and that locals will in fact endorse such an initiative.

Casinos on the Clock in Virginia

There’s plenty of reasons to be excited – online gambling and poker are coming to Virginia. However, there are a handful of constraints that the Virginia Lottery Board, the body that would be overseeing the industry, would need to comply with.

For starters, any casino that wants to operate in the state would need to successfully pass a city referendum by January 2021.

The Lottery Board will have to prepare an initial working version of the draft by January 2020 and all regulation must be finalized by June 2020. The first license in the state cannot be issued prior to July 1, 2020.

Virginia may come with its own whimsical sides, but the online gambling and online poker industries here have a very good chance of taking root. SB 1126 will give a chance to one of the United States’ largest states to introduce online gambling en masse.

Virginia will also exercise a somewhat closer control over its casinos which means that all properties will be introduced strategically across the state for maximum efficiency.

Virginia’s SB 1126 is the state’s most famed sports betting bill, and it has just cleared the Senate. What this means is that land-based properties will be allowed to apply for licenses and offer the first sports betting opportunities in the state.

When Dem. Sen. Louise Lucas introduced his bill, he might have suspected how successful SB 1126 would be. Well, all speculation aside, Mr. Lucas has done very well indeed, with the Virginia Senate just clearing the document.

The Bill will also be voted on in the House of Representative later today and the Committee on Rules will try to prepare an action plan regarding the implementation of the document.

Virginia is an interesting beast when it comes to gaming, as it’s willing to accept spots betting as long as certain conditions are met. We previously explained that SB 1126 expects casinos applying for licenses to meet specific criteria, such as:

To top it all off, the casino will have to take it to a vote whether a casino can be built or operate, leading to multiple mini-referendum state-wide.

Tribal casinos on the other hand will be admitted in cities that have at least 200,000 people living in them with 24% of all estate tax exempted from property tax. This is quite a few hoops to jump through for the state and would be operators.

Still, given the wide endorsement of the segment in its current form, it’s very unlikely that any future business owner would remonstrate against the proposed measures.

Speaking of the legal end of things, the taxes that will be collected from the casino sector also seem to be rather mild compared to other places.

Virginia will seek only 10% of the companies’ gross revenue, with the money being divvied up between various funds, including:

Later, there will be another fund, i.e. the State Local Casino Gaming Proceeds Fund, which will help local authorities develop their regions. This outlines the betting climate in Virginia.

Meanwhile, there are two more bills to keep an eye on, including SB 1238 and SB 1356, but at this point they both seem very unlikely to pass given the momentum SB 1126 has gathered already.

Nevertheless, lawmakers are trying to push from all directions towards the ultimate goal – legalizing sports betting, which should be good news for sports aficionados and companies eyeing expansion.

Virginia is gearing up for sports betting. The Senate Committee on General Laws and Technology has passed a sports betting bill introduced by Democrat Sen. Louise Lucas. This is a continuation of the efforts that were announced in December.

Democrat Sen. Louise Lucas proposed a plan for the legalization of the sports betting industry in Virginia, which has got approved by the Senate Committee on General Laws and Technology.

This is big, and it enables Virginia to start edging closer to the ultimate goal, which is to introduce its own sports betting facilities across the state. There’re a few wrinkles to settle first, though. From Connecticut, to Kansas, to Kentucky, states have been on the move, pushing ahead with their own efforts to see their industries through – and now Virginia is all good to go, well – almost.

According to SB1126 (a bill unifying two previous bills, i.e. SB1503 and SB1706) legalizing the industry would be used as a way to curb unemployment and bolster the state’s coffers. The document states that in order to qualify, a city will need to meet a mix of social & economic criteria:

The bill is also pre-emptively targeting the issue of tribal gaming, allowing tribes to operate in any city with population of 200,000 or above. The cities will also have to have already exempted 24% of all real estate from the local property tax.

The bill offers details about the industry in full. Spanning 22 pages, all games will be part of the gaming climate, including slots, table games, and most importantly – sports betting. However, the measure to introduce casino will not rest solely with lawmakers.

A city-wide referendum would have to be held before a casino can open. Once a property has been set up, it will have to pay 10% tax on its Gross Gaming Revenue (GGR). The revenue will the be divvied up by several state funds, including:

The last hurdle ahead of the bill is to clear the Senate Finance Committee. Given the solid support among lawmakers, SB1126 is on its way to completely change the game for gaming in Virginia.

All things considered, Virginia is truly surging towards good times for its betting industry, which is only now spreading its wings.

Three cities in Virginia have will be joining forces in a bid to bring casino gambling to the state, the main reason being that they hope the industry will assist in securing revenue amid the state’s current financial struggles. Two of the cities – Portsmouth and Bristol – have already made it clear that they are all in with the plans to persuade the government of Virginia to legalize casino gambling and Danville, the third city, is on track to join them. Members of Danville’s City Council are currently gearing to pass similar resolutions as the other two cities within the next few days.

As it stands, casino gambling is still an illegal activity in the state of Virginia and to make the situation even worse than it already is, the state’s Legislature has consistently thrown any attempts to introduce online gambling in the state under the bus. Even though this has gone on for decades, in 2018, lawmakers have high hopes that the stance of the state may finally be softening following the legalization of the historical horse race betting.

Two Virginia lawmakers, with support from Bristol, have begun work on a bill that is expected to allow the residents of the city to vote on the potential construction of a casino in a referendum – this bill will be introduced during the 2019 legislative session of Virginia’s General Assembly. According to Randy Eads, the Bristol City Manager, the city is in dire need of an opportunity to improve its financial situation especially because its debt load “is getting ready to increase dramatically over the next several years”. He believes that the gambling revenue will be very useful in alleviating these financial issues not just for Bristol but for other cities in the state as well.

The Bristol City Manager is also confident that the casino effort will face very little opposition after it passed all of the hurdles in the state’s legislature. However, this claim might be too optimistic especially considering the fact that a Bristol family organization has already launched an effort that opposes the establishment of a casino resort in the city. The family argues that any gambling activity in the state would only lead to “addiction, poverty, higher crime, prostitution, sex trafficking, drugs, diminished poverty values, etc.”

While the other cities have been making tremendous strides towards the push for the legalization of sports betting and online gambling, Bristol has been more proactive in pursuing the agenda. Developers in the city have even gone as far as pitching a $150-million plan for a casino resort in the city which they believe will come with new jobs and revenue for the region and the state. Members of the city council have also expressed confidence that, if the project materializes, it could result in a much-needed economic boost in the region.